Why does water drain clockwise? 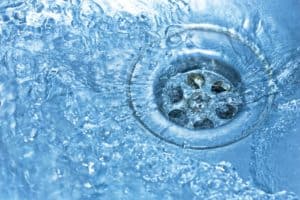 The Loch Ness Monster. Jack the Ripper. Plugholes. You might not think the latter belongs in a list of some of the world’s greatest unsolved mysteries, but for many years, people around the world have asked the question: why exactly does water drain down a plughole or toilet in a particular way?

We at UKDN Waterflow (LG) wanted to investigate and find out the definitive answer to a question that has been plaguing mankind for decades. And we also wanted to go one step further, and find out, once and for all, if water drains the opposite way in the Southern Hemisphere. Here’s what we found…

Lots of people believe the phenomenon that affects the direction in which water drains is the ‘Coriolis effect’.

According to the Met Office, a good demonstration of this effect can be found on a playground roundabout: “If you are standing in the centre of a spinning roundabout (spinning anticlockwise) and attempt to throw a ball, it will appear to curve to the right, when in fact it is travelling in a straight line to anyone watching who is not on the roundabout. This is similar to what happens in the northern hemisphere of the Earth, where winds are deflected to the right.”

This effect is illustrated in the GIF below:

The Met Office also demonstrate the effect in this video:

In fact, there are enterprising individuals in Equatorial countries, such as Kenya, Uganda and Ecuador, who charge visitors to watch them conduct experiments that ‘prove’ the effect of the Coriolis force on the direction of waterflow in a tub. They will fill a tub of water on one side of the Equator, pull the plug and show the water to drain in one direction, before moving over to the other side of the Equator, filling the tub again and pulling the plug to reveal it draining in the opposite direction.

But are these experiments legitimate? Not everyone thinks so…

Is it all a myth?

Although it still appears to be a very serious bone of contention for both scientists and regular Average Joes (practically every article or blog post on the subject leads to disagreements in the comments section), most experts now seem to agree that, while the Coriolis effect is very real, it is not the reason for water flowing down a drain in a particular direction. And, as a result, the vast majority suggest that it’s actually an urban myth that water drains in different directions in different hemispheres.

Most scientists and specialists say that the Coriolis effect could play a part, but that it’s too small compared to other forces at play.

Writing for HowStuffWorks, Jennifer Horton says: “While the premise makes sense – that the earth’s eastward spin would cause the water in a toilet bowl to spin as well – in reality, the force and speed at which the water enters and leaves the receptacle is much too great to be influenced by something as miniscule as a single, 360-degree turn over the span of a day.

“When all is said and done, the Coriolis effect plays no larger role in toilet flushes than it does in the revolution of CDs in your stereo.

“The things that really determine the direction in which water leaves your toilet or sink are the shape of the bowl and the angle at which the liquid initially enters that bowl.”

Robert Ehrlich, physicist at George Mason University in Virginia, US, adds: “In your tub, such factors as any small asymmetry of the shape of the drain will determine which direction the circulation occurs.

“Even in a tub having a perfectly symmetric drain, the circulation direction will be primarily influenced by any residual currents in the bathtub left over from the time when it was filled. It can take more than a day for such residual currents to subside completely.

“If all extraneous influences (including air currents) can be reduced below a certain level, one apparently can observe that drains do consistently drain in different directions in the two hemispheres.”

So, to summarise, it looks like the case is closed and that, sadly, it is nothing more than an urban myth that water drains a certain way without fail. And in the same breath we can put paid to the idea that water drains anti-clockwise in the Southern Hemisphere.

Phew, getting to the bottom of that was very *draining* indeed… (sorry)