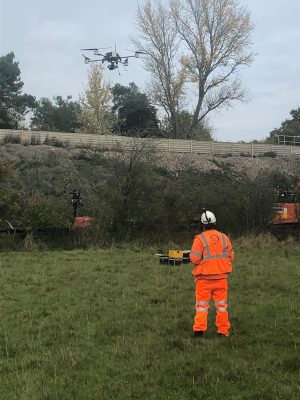 UKDN Waterflow (LG) is a PCL (Principal Contractor Licence) contractor for Network Rail, the public body that owns and manages most of the rail network in England, Scotland and Wales. Network Rail directly manages 20,000 miles of track, 40,000 bridges and tunnels, and 19 of the UK’s busiest railway stations. 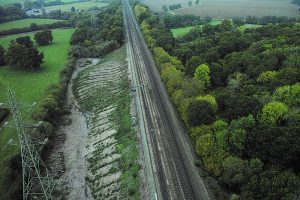 A section of an embankment close to the track had slipped. This caused the track to become unstable which resulted in the line speed being reduced to 5 mph. A key challenge for all rail maintenance partners was to resolve the problem as quickly as possible so normal line speeds could be restored.

Therefore, Network Rail required the SUA survey to be completed within 24 hours to provide the data needed to plan and execute a safe and effective repair.

The project would demonstrate the benefit of UKDN Waterflow (LG)’s SUA service in supporting the safe, effectively and timely response to urgent maintenance issues, so potential detrimental impacts on passenger experience are minimised.

Network Rail first created a scope of works document and sent it to the SUA manager at UKDN Waterflow (LG).

To allow the SUA flight to take place and all relevant data to be captured within the required timeframe, a suitable, effective and safe method of works needed to be in place within a few hours.

“Our flight team conducted a safe SUA flight around a site that contained multiple National Grid power lines and where there were many personnel urgently working on a complex task. All partners worked well together to achieve a successful outcome. It was an enjoyable project and a job well done.”
Dominic Turner | SUA Manager, UKDN Waterflow (LG) 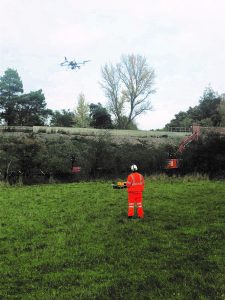 When the UKDN Waterflow (LG) SUA flight team arrived on site, Network Rail’s project manager conducted a site briefing and completed the Sentinel PTS procedures. The project manager and the SUA flight team, which comprised the SUA operator and a controller of site safety (COSS), walked the site. The flight team carried out an on-site risk assessment and completed the on-site survey form to identify potential flight hazards and obstructions over the project site.

The flight team notified the British Transport Police and the air traffic controller at a local RAF base to de-conflict the SUA with any other aircraft that may be in the area. A suitable and safe take-off and landing area for the SUA was identified. Pre-flight checklists were completed.

Then the SUA flight could begin. The SUA operator captured HD video and HD still imagery of the area within a few hours. When the survey flight was completed, data was transferred to UKDN Waterflow (LG)’s SUA mobile command centre.

The SUA operator processed and analysed all the captured data straight away on site and relevant data was presented to the on-site engineers.

The flight team conducted a post flight de-brief then returned to UKDN Waterflow (LG)’s offices in Slough, where the SUA survey report and accompanying date was sent digitally to Network Rail.