UKDN Waterflow > News > New survey: 72% of Britons ‘wouldn’t know what to do if their home flooded’

New survey: 72% of Britons ‘wouldn’t know what to do if their home flooded’ 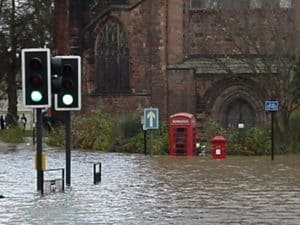 British homeowners and renters have a “dangerous” lack of awareness of how to deal with potential flooding in their home, according to drainage and water infrastructure company UKDN Waterflow (LG).

A nationwide survey conducted by the firm found that 72% of Britons are “not at all confident” or “not sure” that they would know what to do if their home flooded.

But that’s just the tip of the iceberg. Only 21% of survey respondents correctly identified the Environment Agency’s Flood Alert symbol, while 82% said they are not at all confident that they know the difference between a Flood Alert, Flood Warning and Severe Flood Warning.

In addition, 94% don’t have a ‘personal flood plan’ – a list of things you should do in the event of a flood – despite the Environment Agency recommending that all of those who live in a flood risk area creates one.

Furthermore, 77% of respondents said they don’t know where to go to find information about flooding in their local area, while 64% said they weren’t confident that they would know how to keep a record of flood damage for an insurance claim in the event of a flood.

Finally, when asked who they thought was responsible for protecting their home from flooding, the most popular response was “I don’t know” (30%) followed by “The Environment Agency” (26%). Under civil law, individual property owners are in fact responsible for protecting their homes from flooding, yet only 18% of respondents thought that was the case.

The figures point to a distressing lack of awareness that could cause serious problems in the coming years. A recent report from the Environment, Food and Rural Affairs (EFRA) stated that climate change will continue to increase flood risk in the UK.

“More people are likely to be at risk in future as climate change affects weather patterns and sea levels. Rainfall is predicted to become more frequent and more intense; peak river flows could be more than twice current levels in some English regions by 2070,” it said.

Richard Leigh, Group Development Director at Lanes Group plc, commented: “We are particularly concerned about these statistics – they suggest that the majority of the nation wouldn’t know what to do in the event of a flood and that could have a devastating effect on many homes across the country.

“We see on a daily basis the devastating impact of flooding on families and businesses. With weather patterns expected to continue to change and become more extreme, we believe it is essential that more is done to educate the public about the dangers of flooding, and how to deal with it.”

Paul Horton, CEO at the Future Water Association, a business support organisation that aims to shape the future of the water sector, said: “I am surprised at the figures – flooding events happen yearly and there are organisations such as the National Flooding Forum, the Flood Advisory Service, plus the launch of FloodRe insurance scheme. I would have thought the level of knowledge and understanding among the public was higher.

“Ultimately the education of British homeowners needs to come through both national and local strategies. At the national level it must be coordinated by the government through bodies such as DEFRA, the Environment Agency and, I would argue Department of Education, as the knowledge needs to imparted through the school system. More support should also be given to local organisations such as the Flooding Forum, Flood Advisory Service and others.

“Flooding is a critical issue, especially when urbanisation is increasing and rainfall patterns are becoming ever more variable. The challenge is how we manage this at the local level and how we manage our infrastructure, particularly the drainage and sewer networks. These are not just areas of critical infrastructure, they come under the most pressure during heavy rainfall periods and sewer flooding accounts for a high proportion of flooding incidents. It is essential in the management of these incidents to have a well-structured supply chain that can respond to the emergency.”