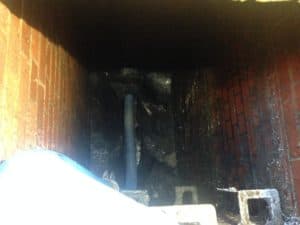 Excellent teamwork by drainage engineers from UKDN Waterflow (LG) and Lanes Group has been praised for ensuring a badly blocked drain was cleared at a campus of University of the Arts London.

They left the foul drain free-flowing following the planned maintenance work to clear the pipe at the university’s Camberwell College site in south London.

It was one of the first times drainage teams from the two companies had worked together since UKDN Waterflow (LG) became part of Lanes Group plc last November.

Bouygues E&S FM UK, which manages the campus on behalf of the university, called in UKDN Waterflow (LG) after the six-inch diameter foul drain began backing up behind an interceptor at its outfall into a nine-inch main sewer.

Roger Murphy, M&E Supervisor for Bouygues, said: “UKDN Waterflow (LG) did a very good job, and it was clear the team back-up and resources from Lanes Group played an important part in a successful solution.

“Everyone worked well together on the day. The approach of UKDN Waterflow (LG) was very professional and they worked hard to get everything in place so the blockage could be cleared quickly.”

Tankers had been used for several days to reduce wastewater levels in the foul drain while a plan was put in place to tackle the blockage.

That plan was then implemented on a Saturday morning, when demand on the campus sewers was minimised, and the campus was least busy.

Three tankers were put on standby to pump out the drain line, along with a JHL Combi jet vac tanker from the Lanes Group London depot at Rainham, and a CCTV survey team from UKDN Waterflow (LG).

The first task was to remove about 15,000 litres of waste water from the foul drain. Then the Combi jet vac tanker, which has enhanced jetting and vacuumation capability, was used to clean the drain and interceptor.

UKDN Waterflow (LG) Senior Technician Dwayne Mills, who supervised the work, said: “A significant amount of hardened scale was removed during this cleaning process, which we think was causing the blockage.

“The drain and interceptor was left free-flowing. We carried out CCTV surveys of all drains in the vicinity of the interceptor and they were also clear and working well, so we concluded we had solved the immediate problem.”

The operation took four hours and meant Bouygues could confidently inform its client that the drain had the capacity to manage wastewater flows when students returned to continue their studies on Monday.