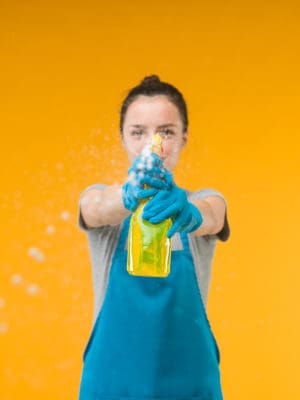 Men may need to step up and help the women of the UK make this year’s spring clean the best yet, after revealing new spring cleaning statistics showed British males aren’t pulling their weight at home.

And it’s not just the men who never spring clean who are letting the side down – it would appear even those who say they spring clean every year are seriously lacking in effort. When we asked women how long they spend on their annual spring clean, the most popular answer was 15+ hours (16%). That’s compared to… wait for it… a measly 3-4 hours for men (14%). So that’s more than 10 hours’ extra work each spring for women.

Perhaps the most illuminating insight from the survey came when women were asked what would allow them to spend longer spring cleaning. The most popular answer was “if I had some help” (33%).

Men, your time is now.

While it’s clear from our survey that men aren’t pulling their weight in the cleaning stakes, it doesn’t mean that they don’t have the best intentions.

We wanted to find out whether our respondents thought there were specific spring cleaning jobs that should only be carried out by women (pink jobs) or by men (blue jobs).

Although the statistics we have revealed so far might suggest that many of our respondents think there should be a split in the housework carried out by men and women (i.e. that men think they should do less!), our research actually found the opposite – 77% of our respondents said they don’t believe in pink or blue jobs.

What’s more, the 15% who believed in pink and blue jobs were actually more likely to state that men should be responsible for more chores than women.

Here are the most popular choices (where more than 50% of respondents selected the job as either blue, pink or purple) from the survey.

Blue jobs (for men only)

Pink jobs (for women only)

Another interesting finding from our study was that those aged between 35 and 44 spend as many as 10 hours longer spring cleaning than 25 to 34 year olds.

What’s the most house-proud region of the UK?

Our research uncovered the regions in the UK that are most likely to spring clean every year. They are:

And the regions that spend longest (15+ hours) spring cleaning each year?

Which regions are least likely to spring clean?

The locations of the UK least likely to spring clean every year were revealed to be:

Meanwhile, the areas of the UK that spend the least time spring cleaning (between 0-2 hours) are:

What are the most popular spring cleaning chores?

When it comes to spring cleaning, it’s clear that different households have different ideas of the work required to get the home looking spick and span. However, according to our survey, these are the 10 activities that are most likely to make up a spring clean:

And the activities least likely to be included in a spring clean?

It’s particularly disappointing for us to see keeping drains and gutters in good nick is such a low priority for so many households. We obviously see first-hand the problems this can cause, so we want to make sure more people are aware of the importance of clean drains and gutters. Keep an eye out for some content over the next few weeks that will make it easier for you to keep your drains in gutters in tip-top shape, and what can happen if you don’t…