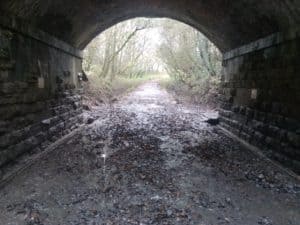 The bridge, in School Hill, Crewkerne, had been suffering from a suspected blocked drain, which had caused intermittent low level flooding since the summer. However, when the UKDN Waterflow team arrived on Tuesday 27th November they were hit with some of the worst weather Somerset has experienced in recent years, with flash floods causing havoc throughout the county. This raised the level of flooding under the bridge to well over three metres and caused UKDN Waterflow Project manager Matt Duncan to rethink plans.

Matt Duncan commented:”We arrived on Tuesday just as the worst of the weather had hit the county and I immediately saw that the job had changed. On inspecting the site a month ago it looked like we’d be dealing with water about a foot or so deep. At its deepest the water had risen to just under ten feet. It was an amazing sight but we worked hard to both clear the water and find the problem, which turned out to be a blocked gully rather than a drain.”

The 54-hour job pumped out 9.8million litres (2.16million gallons) of water and used a crew of six in the end, with a vacuum tanker unit draining 1800 litres of water a minute through a four-inch hydraulic pump.

Graham Dodsworth, Maintenance Protection Co-Ordinator from Network Rail Commented:” This should have been a normal scheduled maintenance job for UKDN Waterflow which ended up being slightly different due to the exceptional weather conditions. But they weren’t put off, got stuck in as usual, and made the route passable again for local traffic.”