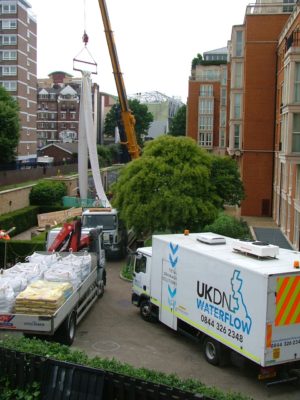 The emergency response saw a team of 70 UKDN Waterflow professionals use cutting-edge technology to reinforce the sewer after the survey – carried out on behalf of Thames Water as part of their regular inspection programme for sewers crossing railways – identified that its brickwork was moving substantially every time a train passed. Failure to identify this issue would have eventually seen the sewer collapse.

The sewer, located a short distance from King’s Road in Fulham and a stone’s throw from Stamford Bridge – the home of Chelsea Football Club, was below a section of the London Overground line between Imperial Wharf and West Brompton, running along the trackbed, with manholes in between the tracks.

The risks posed by this weakness meant an emergency repair was needed, but the difficult-to-access location beneath a busy section of railway track meant this was far from a straightforward operation.

Thames Water, Optimise and UKDN Waterflow worked with Network Rail, the owners of the track, to formulate an emergency plan to allow the works to be undertaken at very short notice, a process that would normally take many months to organise. As the Olympics were only a few weeks away it was decided that the railway must be made safe beforehand so to prevent any travel disruption during the Olympic Games.

As around 40m of the sewer was actually directly beneath the track excavating 70 metres of sewer would have been a huge undertaking so, instead, a trenchless solution was proposed. A glass reinforced liner would be inflated inside the sewer before being exposed to ultraviolet light to set it hard once in-situ.

David Martin, High Risk Asset Manager at Thames Water said ”The Kensington Canal Culvert, a brick foul sewer running along the West London Line has been one of the most difficult sewer crossing railway sites to survey due to the manholes being situated in the railway cutting, and in between the running rails.”

“UKDN Waterflow has put in a huge amount of effort to arrange access and to carefully dig out many tons of ballast and silt to enable this survey to take place. Their proactive approach to obtain possessions to do this emergency relining work and their ability to create solutions for otherwise impossible problems enabled a successful solution to be completed.”

“The speed at which UKDN Waterflow, Optimise and Network Rail were able to respond to and fix this issue was impressive – given the scale of the job and the number of stakeholders involved.”

Adding to the complexity of the job, the entry point to the drain could only be accessed from the car park of a high-end apartment block, so sensitive negotiation was required with the residents to allow use of the space.

The operation – which took three weekends to complete – began with a full structural survey and a large clean-out process, during which over 17 tonnes of silt were removed from the sewer.

The agreed solution was to insert the UV-activated liner and surround it with grout to allow structural integrity to be returned to the sewer without the need to excavate.

A highly specialised liner of almost a metre in diameter and 72 metres in length was needed to reinstate the sewer. This had to be urgently manufactured by a supplier in Germany and arrived just in time to be installed during the second weekend of works. Because the liner weighed eight tonnes and access was challenging, a 40 tonne crane was used to lower it into place.

Once the liner was cured the team used a new multi-directional grouting system to deploy the right volume of grout on all sides of the liner to ensure any gaps in the sewer were filled and stabilised. The final weekend was used for further grouting and a full re-survey to ensure that full integrity had been returned to the sewer.

Because of the scale and complexity of the job, and the need for it to be completed as quickly as possible, a large team was needed – at the height of the works, more than 70 people were on site.

Mark Lusher, Technical Director at UKDN Waterflow, added: “The ability to deploy a large team of skilled engineers and technicians at a moment’s notice, armed with cutting-edge technology, is an essential element of our commitment to tackling infrastructure issues before they become a safety concern and, ultimately, in providing the best possible service for our customers around the country.”

Whilst the work was being undertaken, the opportunity was taken to clean and survey the remainder of the sewer along the tracks. This was found to be in a similar condition and in one location; the sewer had actually began to collapse. Further emergency works were carried out during the Olympics, using short track possessions at night to get material to site to stabilise and rehabilitate the collapsing section of culvert so to prevent any disruption to train services. Now the Paralympics have finished the remaining section will be relined.