Judges will be looking to reward the best project in terms of the quality and execution of the design, and the innovation brought to the project. They will also be looking at the cost effectiveness and ability to drive economies into the project, team working and collaborative activity, client satisfaction and public engagement.

Steve Shine OBE, UKDN Waterflow’s Chairman commented “I am thrilled that UKDN Waterflow and the Ham sewer project is a finalist for this prestigious international industry award. It highlights the continued dedication and hard work of the talented teams and individuals that make up this company.”

The winning entry for the International Tunnelling and Underground Space Awards will be a project that sets new standards in terms of client satisfaction and is a model for future similar projects. It will take into account how the rehabilitation project has dealt with operational issues and what mitigation measures were taken to keep the tunnel or facility in use.

UKDN Waterflow are delighted that the Ham sewer project has been shortlisted, as the project has already won the Large Renovation category at the UKSTT awards earlier in the year. 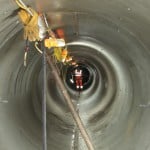 During works the sewer was diverted using six 300mm pumps accommodating a peak sewer flow of 800 litres a second to the nearby Wick sewer. A new weir and penstock valve blocked the flow, and three generators producing a massive 1.2 megawatts of power kept the pumping going around the clock.

Each of the five tonne sections was jacked into place along guide rails before being meticulously welded together to standard EN1011 and tested using ultra sonic NDT to EN5817 category C to ensure a 100% pass rate. Crossrail’s two 7.1 metre diameter Tunnel Boring Machines (TBMs) passed just 500mm from the sewer, in what is believed to be the closest pass by a large diameter TBM to a major sewer for this type of work.

Nick Harris, UKDN Waterflow’s CEO summed up the shortlisting for the Rehabilitation Project of the Year at the International Tunnelling and Underground Space Awards “The Ham Sewer project demonstrates the innovation, project management and capability within the UKDN Waterflow business, and British engineering on a world stage. It also shows UKDN Waterflow’s ability to provide the best operational delivery, best service and best technical capability for water, wastewater, drainage and infrastructure projects.”

The awards will be presented at a prestigious awards night to be held at the Grosvenor House hotel in London in December.