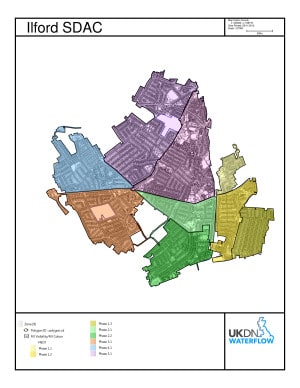 Asset data and work schedule data is passed instantly between the project base in Clapton, East London, and the CCTV survey units out in the in the field, this is achieved by internet link, massively reducing the use of paper records and administration time.

The Optimise Sewer Drainage Area Catchment (SDAC) project for Thames Water is looking at capturing a broad spectrum of information of their existing asset and network as well as sewers and drains that are now the responsibility of Thames Water as a result of the Private Sewer Transfer (PST) in November 2011.

The project was set up from scratch by Optimise and UKDN Waterflow’s technical services team in just four weeks included opening up a new base and establishing a core team and setting up the complex hardware and software. Resources were mobilised and just ten weeks later some 15 CCTV rigs along with four 28 tonne JetVac combination trucks, a smaller mid-range jet combination unit and van pack jetters are now operating under the new team. The project will reduce the frequency of sewer blockages, internal and external property flooding, identify sewer collapses and potential pollution problems as well as mapping the network comprehensively. Ultimately this will enable improvements in the hydraulic function of the waste water network within the SDAC area to be designed and planned.

UKDN Waterflow’s delivery manager Jim Eldred explains more “We have a great opportunity within the SDAC project to demonstrate that with the use of new technology and software the efficiency of large scale CCTV survey projects can be vastly improved, gathering and quickly analysing huge amounts of waste water network information that previously would have required a large number of skilled people and many months of work. We’ve already recorded information such as the amount of interceptor traps, network pipe score data and debris build-ups in the network that affect large areas of the network. It’s an exciting project that could set the new standard for drainage asset management in the industry. ”

The system uses Infonet Mobile software as a bolt on to the standard set up in a site based CCTV survey unit. The major benefit is a seamless two-way transfer of data between office and field units resulting in quick turnaround of CCTV survey data.

The software imports GIS snapshots of the network and catchment which is then used by UKDN Waterflow Data Managers to accurately plan and auto-populate work schedules for each of the survey teams using 3G internet connectivity. The work, scheduled on a geographical principal, matches scheduled tasks to job numbers to ensure robust auditing, and ensures that any necessary liaison with local residents for access, the local authority, or other interested stakeholders is fully completed by Optimise and UKDN Waterflow before site work commences.

The lead CCTV rigs complete the asset surveys or identify cleaning operations and then sewers are resurveyed to produce a complete set of data, with any major issues quickly identified and escalated. Upon completion of the surveys the validated Wincan CCTV data, with any amendments highlighted, is returned to update Infonet SDAC databases. Teams actively feedback high priority sewer issues for fast track rehabilitation, identifying the root cause of performance problems.

David Eales of Optimise, the joint venture between J Murphy and Sons, Barhale Construction plc., Clancy Docwra Ltd and MWH that was awarded the prestigious five year AMP5 contract by Thames Water, commented “This flexible CCTV inspection solution has saved us time and cost, and ensures that all detail is captured digitally – so no bits of paper to lose and a great reduction in errors. This project has demonstrated what a powerful tool this is in asset management, allowing us to capture and act on the data more quickly than before. Once mapped our team can quickly use this information for modelling and design and cost benefit analysis to create a robust rehabilitation plan. We’re much closer to creating a ‘one stop shop’ solution for sewers within the Thames Water area.”

UKDN Waterflow have already worked on 200,000 metres of drainage in the Ilford SDAC with more SDAC’s already planned in 2013.