How to avoid and deal with frozen water pipes this winter 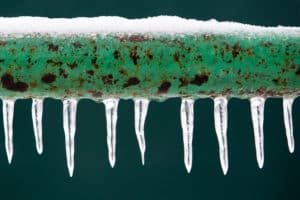 Winter is well and truly here. The temperatures have already started to drop and, while the prospect of a white Christmas may be appealing to many UK households, with this winter weather also comes a significant risk to your property.

Frozen pipes that eventually burst have the potential to wreak havoc on the home and are one of the biggest causes of property damage at this time of year. According to the Association of British Insurers, during the cold snap of 2010 there were 3,500 claims lodged for burst pipe damage every single day.

Why do frozen pipes burst?

You may think that frozen pipes burst because of ice expanding within the pipes. Well, that’s only partly true – when water freezes, its molecules do begin to take up more space than they did in their liquid form. However, that’s just the first stage of the process. When the ice expands, water gets forced towards the tap, leading to huge amounts of water pressure building inside the pipe and the pipe eventually bursting.

How to avoid frozen pipes

Pipes that are most at risk of freezing and bursting are those that are not insulated. So, if you can, make sure your pipes are all insulated and, if you already have lagging in place on any pipes or tanks, check that the lagging is still intact.

Leave your heating on

Try to avoid temperatures dropping to freezing by ensuring your heating is left on – even if it’s just on a low temperature – for at least an hour a day, particularly if you are away from your home for an extended period of time.

In addition to keeping your heating on, it’s also important to do everything you can to keep temperatures in your home as high as possible by reducing draughts. This chilly air can speed up the freezing process, so use insulation material to plug gaps where you can.

Leaking pipes and taps are more susceptible to freezing. As the temperature starts to drop, check your home and make sure any leaks have been fixed before it’s too late.

If pipes, hoses or cisterns aren’t going to be used over the winter, make sure you have drained them to avoid any unnecessary disasters. There may be some structures that you can’t drain, however, in which case you should try and insulate them where possible.

The stopcock is a valve that turns your cold water system on or off, and every adult in your household should know where it’s located. That’s because, in an emergency, you’ll need to switch off the water supply as quickly as possible.

The location of the stopcock varies from property to property – it may be under the kitchen sink or outside beneath the pavement. In other cases they may be in a front or back hall, or in a larder unit next to the sink.

Turn off your electricity supply

If a pipe has burst, you will also need to turn off your electricity supply in case of a flood in the home. So, as well as the stopcock, it’s also really important to know where your main electricity switch is located.

In the event of an emergency, it’s always best to seek the help of a professional, so make sure you know of someone to call if you can’t stop your pipes freezing and bursting.