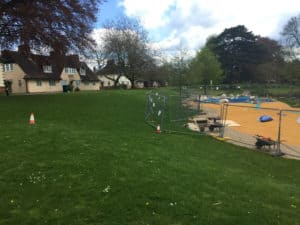 A ground probing radar survey carried out by UKDN Waterflow (LG) has helped facilities managers develop a solution for carrying out urgent repairs to a popular children’s play area.

The Splashpad attraction in Gheluvelt Park in Worcester had to be closed because one of its water tanks was found to have been ruptured.

Place Partnership, which provides property and facilities management services for Worcester City Council, which runs the attraction, was tasked with investigating the problem and devising a repair.

UKDN Waterflow (LG)’s ground probing radar survey team was brought in to help establish the location of underground structures, pipework and cabling around the tank without having to carry out excavations.

Richard Sherwood, Business Development Manager for UKDN Waterflow (LG), said: “Plans for the ground around the tank were not complete, and Place Partnership wanted to avoid, in particular, the risk of digging down and disrupting utility assets.

“Using our ground probing radar system we were able to give a view of all main structures associated with the tanks, which was very useful in planning the best approach to carrying out the best and most cost-effective repair.”

Splashpad is a very popular attraction in Worcester, so the city council was keen to ensure a repair could be carried out as quickly and as effectively as possible.

It has two tanks – one for clean water, used to create fountains and water squirters in a safe play environment, and the other for dirty water as part of a filtration system.

It was the dirty water tank that had been found to have been ruptured. Up to three tonnes of ballast was removed from the tank, which was found to have a large hole in it.

Place Partnership Water Consultant Andy Wood said: “Our plan involved patching the tank and pouring concrete around its side to protect it against future damage.

“The ground probing radar survey carried out by UKDN Waterflow (LG) enabled us to establish where pipes and cables ran and plot them on a site plan for the first time. We could then plan the concrete work to avoid these assets.

“Without it, we would have had to dig a number of trial holes, which risked damaging underground structures, wold have taken more time, and would have probably increased costs.

“The ground probing radar survey was, therefore, a useful part of a solution that we needed to devise with urgency to get the Splashpad back open again in time for spring and summer, when it is most popular.”