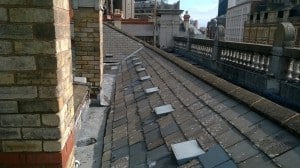 Drainage engineers from UKDN Waterflow (LG) had to call for urgent air cover after facing an unusual health and safety hazard – being dive bombed by seagulls.

The team had been working on the roof of a five-storey retail building in the centre of Birmingham when they came under sustained assault from the sky. The only option was to call in specialist support in the shape of a bird of prey pest control team from UKDN Waterflow (LG)’s Air Division.

The roof the UKDN team were completing a drainage survey on in Birmingham.

UKDN Waterflow (LG) Business Development Manager Richard Sherwood said: “You could say our engineers found themselves being ambushed, so they had to call in air support.

“Health and safety is our paramount concern and, when working at height, our teams have to be able to concentrate fully on the task and the associated risks, without having to protecting themselves from angry seagulls.

“The birds are very territorial, and unfortunately we had to invade their space temporarily while we did our work, which made them agitated.

“Our health and safety manager attended the site to assess the risk, and with the breadth of services UKDN Waterflow (LG) has to hand, we had an in-house solution available.

“As soon as our pest controller brought the hawk to the location, the seagulls could see they were outgunned and things became quieter, with none of the birds or nests being harmed. This allowed our engineers to get on with their work.”

UKDN Waterflow (LG) Ltd, part of Lanes Group plc, had been commissioned to clean, trace and survey the above and below ground drainage system associated with the building.

That included carrying out CCTV surveys of the rainwater downpipes which required them to work on the roof. The seagulls were not the only wildlife challenge presented by the project. The drainage team found that a fox had taken up residence at the bottom of a manhole, and called in the RSPCA to help remove it.

In a two-day operation, UKDN Waterflow (LG) used powerful water jetting equipment to clean drainage pipes where necessary. Mini CCTV drainage survey cameras were used to record HD video footage of the drain lines as part of a detailed report about their construction and condition.