The most amazing images of sewers from around the world 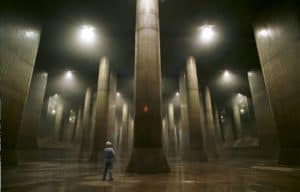 If you were asked to name some of the most beautiful places in the world, some of the more common answers might include Victoria Falls, the Fjords, Petra, Machu Picchu, the Grand Canyon and so on.

But if you asked the UKDN Waterflow (LG) team, you might well get a different answer: sewers.

Yes, sewers. What many of you may not realise is that sewer systems can be, surprisingly, extraordinary places. And thankfully there have been many talented photographers and intrepid explorers who have been able to capture the unique beauty and amazing architecture found in the most unlikely of places.

Let’s take a look at some of them now….

DISCLAIMER: Most of the photos below contain people in the sewer network without breathing apparatus, which is required for health and safety purposes. We do not endorse entering the network without suitable breathing equipment. For more information about how we protect our drainage workers, visit this blog post.

The sewers beneath the city of Saitama, captured here by the Edogawa River Office, resemble a labyrinthian subterranean city that has long been abandoned:

Steve Duncan runs the website undercity.org, and spends his time exploring the unseen infrastructure of cities all over the US and beyond. The images below show what he found when exploring the underbelly of Brooklyn, New York:

And here is a video of the aforementioned explorer on his underground adventures:

The following three images have been taken by Thames Water. UKDN Waterflow (LG) is part of Lanes Group plc and as part of our contract with Thames Water we are lucky enough to see this stunning architecture on a daily basis:

The guys at sub-urban.com have also spent a lot of time exploring the capital’s vast drainage network. Here are some of their snaps:

Another ‘urban explorer’, known only as ‘Substormflow’ on Vimeo, took more than 5,000 photos of the sewers lying beneath Manchester and created this amazing video with the results:

Drains of Manchester from substormflow on Vimeo

You’d be surprised how many fantastic images there are of sewers across the web. Here are some others that didn’t quite make it onto our blog post: