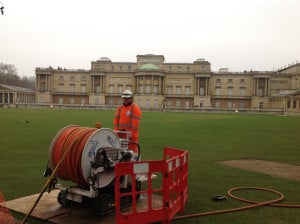 The lake overflow system at Buckingham Palace had not run properly for some years, even though it had been assessed by a number of different drainage contractors. We were approached to see what could be done to finally resolve the problem.

Probe jetting techniques found the roots of plane trees in the palace grounds had infested the pipework. This adversely affected the lake level regulator, which was designed to ensure water drained out through a nine-inch diameter pipe when it reached a certain level. 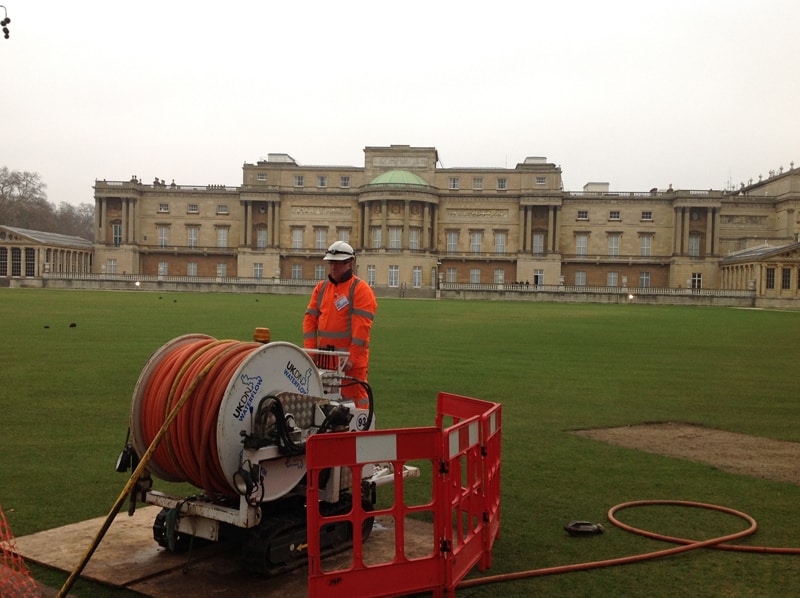 Our solution was to deploy a CCTV drainage survey camera and a jetting and vacuumation tanker. The HD-quality robotic video camera would be used to identify the location and nature of the root ingress. The video images would be used to guide the jet vac tanker crew as it used its powerful water jetting equipment to cut through the roots.

Once this work was complete, we were commissioned to carry out further pipe rehabilitation work to reduce the risk of root ingress occurring again.

The survey and root unblocking phase of the work lasted five days. We used a robotic pan-and-tilt CCTV drainage survey camera to assess the pipework which consisted of a 450mm diameter brick culvert, a 225mm diameter cast iron pipe, and a 300mm diameter concrete pipe.

Two buried manholes were also located. Large fibrous and main tap tree roots were the main cause of the blockage. These were removed by high pressure jetting carried out by a jet vac tanker crew.

The overflow pipes had been damaged by the roots so needed to be lined.

This was done using the ultra violet (UV) light cure in place pipe (CIPP) system. This involved installing a resin-impregnated liner made from glass fibre in the pipe. A rubber packer was then inflated inside the liner, using compressed air, to push the liner against the damaged pipe. The packer was removed. Then, a UV light ray was sent along the pipe to cure – or harden – the resin. This created a new sealed, watertight pipe with a pipe.

UV lining was the most appropriate solution because it is faster and less invasive than the more traditional hot water CIPP system. It also generates no waste water in the way hot water CIPP does, so is more sustainable.

By using no-dig lining to rehabilitate the pipe, there was no need for extensive and costly excavations to access the damaged pipe sections and replace them, which would not have been appropriate in Buckingham Palace Gardens.

Once the pipe siphon was clear and clean, a torrent of water ran into the main overflow culvert. The overflow pipes were clear, and the lake level regulator system worked properly. The UV pipe lining significantly strengthened the pipe and created a tough, seamless barrier to prevent tree roots getting into the pipe in the future.