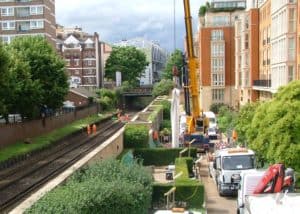 While carrying out a routine survey, one of our CCTV drainage survey crews identified a problem that resulted in the need for an emergency project to reinforce 70 metres of Victorian brick-built sewer running one metre from live railway lines. The survey team, carrying out work as part of Thames Water’s regular maintenance programme, could see that the brickwork moved each time a train passed above. If the problem was not addressed, the sewer could have collapsed.

The sewer was located a short distance from King’s Road in Fulham close to Chelsea’s Stamford Bridge football stadium. It was running below the track bed of a section of the overground rail line between Imperial Wharf and West Brompton.

UKDN Waterflow (LG) worked with Thames Water, Optimise, Thames Water’s capital projects partner, and Network Rail on the urgent sewer reinforcement project. The work had to be completed in just a few weeks, in time for the London Olympics, to prevent the need for track restrictions during the games.

Access to the sewer was via manholes between the dual railway tracks. This made the sewer reinforcement project much more difficult.

As around 40m of the sewer was actually directly beneath the track, excavating 70 metres of sewer would have been a huge undertaking. Instead, a trenchless solution was proposed. A glass-reinforced liner would be inflated inside the sewer before being exposed to ultra-violet light to set it hard. This is a process called UV cure in place pipeline (CIPP) lining.

“UKDN Waterflow (LG) has put in a huge amount of effort to arrange access and to carefully dig out many tons of ballast and silt to enable this survey to take place. Their proactive approach to obtain possessions to do this emergency relining work, and their ability to create solutions for otherwise impossible problems, enabled a successful solution to be completed. The speed at which UKDN Waterflow (LG), Optimise and Network Rail were able to respond to and fix this issue was impressive, given the scale of the job and the number of stakeholders involved.”

A team of 70 UKDN Waterflow (LG) personnel worked on the project. The only viable entry-point for the lining operation was from the car park of a luxury apartment block, so sensitive negotiation was required with the residents to allow use of the space.

The operation took three weekends to complete. It began with the sewer being cleaned, a process which removed 17 tonnes of silt. A structural survey was then carried out.

A highly-specialised liner of almost a metre in diameter and 72 metres in length was needed to reinstate the sewer. This had to be urgently manufactured by a supplier in Germany. It arrived just in time to be installed during the second weekend of the project. Because the liner weighed eight tonnes and access was challenging, a 40 tonne mobile crane was used to lower it into place.

Once the liner was cured, the team used a new multi-directional grouting system to ensure gaps in the sewer were filled to the right level and fully-stabilised. The final weekend was used for further grouting and to carry out a post-works structural survey.

The sewer reinforcement project using UV lining was a success. Despite the urgency of the work, it was completed on time and on budget. Planning that would have normally taken several months was completed in a few weeks, with no diminishing of health and safety standards and operationally efficiency.

No track restrictions were needed on the railway line during the London Olympics, so there was no risk of transport problems.

The project allowed further sections of the sewer to be surveyed, which identified additional structural problems which could be addressed through a planned programme of works.