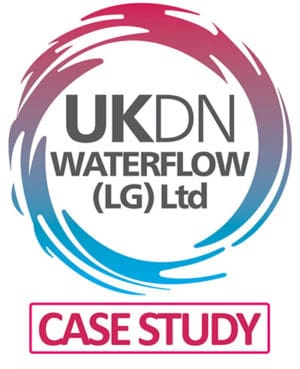 The blockage in the pipe was very close to the back of the house. This meant care was needed to avoid damaging the foundations. Because the pipe ran from under a basement, it was also three metres underground, so a lot of material had to be dug out to reach it. However, access to the Victorian terraced house was limited. The back garden is enclosed in high brick and flint walls. This hampered removal of excavation spoil.

“The UKDN Waterflow drainage engineers were very thorough and methodical. They worked very well with our insurance loss adjuster and with us to find the right solution. They were professional, friendly and efficient. Also, unlike previous drainage contractors, they always did what they said they would do, and communicated brilliantly.”

Claire and Chris Hawes live in a terraced house in Lewes, East Sussex. They had been experiencing a drainage problem with their foul drainage pipe for eight years. Sewage regularly backed up in it, causing internal floods. Two other contractors had tried to fix it. Both failed. Bad smells associated with the blockages were discouraging their son’s friends from visiting. The Hawes family was desperate for a permanent solution.

HD video footage from the CCTV drainage survey, and evidence found during the excavation, found the blockage was caused by a collapsed Buchan trap. This is a device commonly fitted in Victorian properties to keep out vermin, but not needed with modern plumbing.

Overpumping was put in place to take wastewater from the house while the excavation was carried out. Health and safety is a number one priority for UKDN Waterflow (LG). Extensive shoring protected the excavation team and prevented damage to the house and garden walls.

UKDN Waterflow (LG) replaced the Buchan trap with a straight section of pipe. A full-sized manhole was also installed. This gives the best maintenance access to prevent further blockage problems.