UKDN Waterflow > Advice > What is a French Drain?

What is a French Drain? 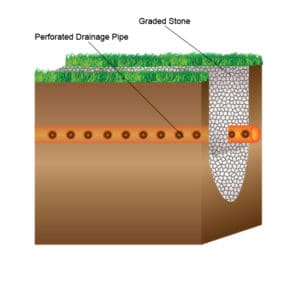 A French drain is a drainage system designed to drain water from land. It is often associated with ensuring the ground does not become water-logged near a structure, such as a wall, or building.

French drains come in many forms. The are also known as weeping drains, filter drains, trench drains, curtain drains, and land drains. In their modern form, they often consist of a perforated plastic pipe, set within a trench, filled with graded stone.

How do French Drains Work? 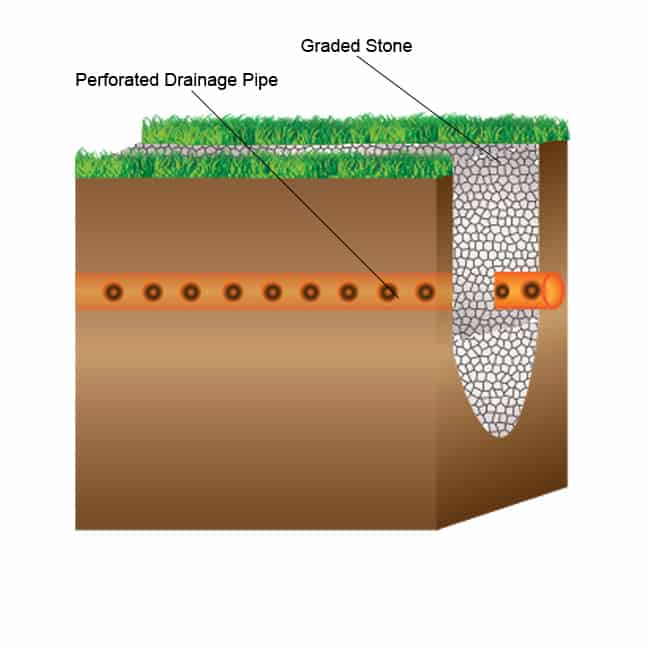 French drains work by allowing water in the ground to filter into the perforated pipe laid in the middle of the graded stone in the centre of the trench.

The water is then carried away by the pipe, either to a soakaway or into a wider surface water drainage system, including a natural water course, if this is allowed under water regulations.

The size, position, and design of a French Drain will determine the area of ground drained, and the volume of water that can be collected.

Design and Construction of French Drains

French Drains are designed to allow only water to filter into the collector perforated pipe. To this end, a trench is first dug. The trench is lined with a permeable membrane.

The trench is partially-filled with graded stones. A perforated plastic pipe of the desired diameter is laid in the trench. Then trench is filled in with more stones over the top.

In most cases, larger stones are placed at the bottom of the trench, and smaller stones, and gravel, are used to cover the top.

Like the trench membrane, the stones act as a filter to help ensure only water can get into pipe. They also ensure the water flows at the desired rate into the French Drain, and that the pipe remains stable within the trench over a long period.

In some cases, two or more perforated plastic pipes can be laid in the same drain to create a French Drain with a higher water-carrying capacity.

French drains can be designed so the gravel and stone infill is at ground level. Or they can be buried deeper underground and covered with earth and turf.

French Drains can be used to improve the quality of agricultural land and to prepare land ready for construction.

When associated with the built environment, French Drains are often an integral element of a sustainable drainage system (SuDS).

These are designed to manage surface water in a way that prevents surface water flooding while enhancing the environment, minimises the need for water treatment, and supports wildlife.

As has been stated, French Drains can also be installed to draw groundwater away from areas where it could undermine or damage built structures, such as walls, or buildings.

This is increasingly the case in some urban areas where basements rooms are being created to extend properties where space is limited. In these cases, French drains may form part of the development’s SuDS.

The principles behind French Drains are also uses in the installation of water management systems on many highways, as well as railways.

Railway track drainage systems involve perforated pipes set in a membrane-lined trench filled with graded stone. They are designed to prevent the build-up of water within rail track ballast, that can undermine railway tracks.

French Drains, like any other drains, can become blocked or faults can develop, reducing their effectiveness.

Over time, silt may get through the membrane and stone bedding in the trench, and then into the pipe, where it may disrupt the water flow.

Pipes may become damaged, for example, by the movement of heavy vehicles over them, or inadvertently through future construction activity.

If groundwater conditions change, additional French Drains may need to be installed, or new ones that have higher water-carrying capacities.

A planned and preventative maintenance (PPM) programme will identify these issues and allow effective solutions to be put in place.

Carrying out a CCTV camera drainage survey, in which a camera on a flexible rod or on a wheeled robot is placed down the pipe, will identify faults.

Then, careful water jetting of the pipe may be used to desilt the pipework or clear root infestations. An electro-mechanical pipe cleaning machine may also be used for clearing roots.

In some cases, a French Drain system may have to be excavated and replaced, along with the trench membrane and stone infill, to ensure the drainage system works effectively.