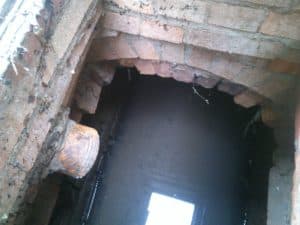 Cheshire East Borough Council needed to put in place a programme to survey all main culverts within its boundaries, focussing specifically on those that were most prone to flooding. This was a key element of the council’s flood risk management strategy.

UKDN Waterflow (LG) worked with an engineering group to survey seven of main culverts across the borough. Culverts with a combined length of 1.8km were surveyed. They were a mix of spun concrete, brick construction, and twin wall plastic construction, and measured up to 1.2 metres in diameter.

The culverts ran through areas known to surcharge and cause flooding to the basements of local properties. The aim was to provide detailed survey reports and topographical data that would support the engineering consultant in developing plans for preventing future flooding.

Access to the culverts was through triangular Hartlid manholes leading to brick-lined shafts and catch pits. Confined spaces access, dye testing and sonar tracing were used to determine the depth, flow rate and direction of the culverts.

The surveys provided a detailed view of each culvert, its composition and size, flow direction, condition and connectivity with the surrounding drainage network. A visual asset condition check of each manhole was also recorded, where possible.

Our report recommended several repairs, including removal of bottlenecks, regrading of an open section of culvert, high pressure jetting to remove root ingress, and UV lining to sections of culvert where longitudinal cracks were found.

We also recommended creating a new section of culvert through directional drilling or laser-guided auguring. This was to bypass a section of box culvert that was particularly prone to flooding.

This approach would have been less expensive, more environmentally friendly, and cause less local disruption than rebuilding the current culvert.