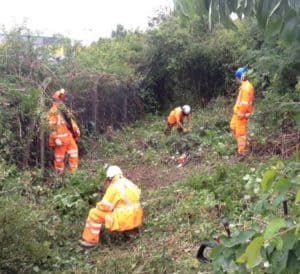 Heathrow Express is an airport rail link between London Heathrow Airport and London Paddington station. The service is operated by the Heathrow Express Operating Authority, a wholly owned subsidiary of BAA. It is not legally part of the National Rail system, even though it shares track with National Rail trains for much of its journey and terminates at a London mainline station.

Working through a Tier 1 contractor UKDN Waterflow was contacted regarding the location of a collapsed wildlife tunnel underneath the tracks, buried beneath significant vegetation growth.

The tunnel, suspected to have been approximately 50metres in length, straddled the track but on the opposite side the embankment was overgrown with vegetation and could not be easily located.

Locating the tunnel would require access along the Heathrow Express line cess and then walking down the embankment. As the access is along the live tracks, any person working on the project would need to be would have to be Personal Track Safety (PTS) trained.

UKDN Waterflow provided a team to clear the vegetation from the embankment and locate the Wildlife tunnel. Access to the other side was restricted to pedestrians only, so all of the works were completed from one side. This also eliminated the need to obtain access from Network Rail.

As suspected we found that the existing tunnel had collapsed. Our solution involved accessing the track during pre-booked minor possessions when trains were not running, and these occurred at night.

Rehabilitation of the tunnel, approximately four metres below rail level, involved drilling through the existing collapsed sections, following the drill head with a locater to ensure accuracy, and then installing a 150mm High Density Polyethylene (HDPE) duct by pulling it back with the drill head. This part of the solution was completed during the day, allowing the rail link to remain in service.

All works were completed on time and within budget.

As our PTS staff were trackside we were also asked to assist in some cable installation, pulling the cable through and laying in a 50 metre trench before backfilling, and removing the equipment.